We established that we have a quorum for voting purposes. (RMOC Bylaws Section 4.4: "A quorum at any general meeting of the membership shall consist of twice the number of elected officers plus one voting member.")

Sherry Litasi gave some opening remarks, and we all went around the room to introduce ourselves.

B. President's Report from Sherry Litasi:

Sherry emphasized that having a robust volunteer staff is crucial to the success of the club and our events.

Sverre gave an overview of permit status at our map areas.

Rich provided a financial summary report for the 2007 Convention and Five-Day meet.

Rich reported that we are financially secure and solvent.

Brooke also presented a summary of RMOC membership fees and meet fees in comparison to other clubs of a similar size (BAOC, QOC, NEOC, CROC, COC, LAOC and DVOA). This comparison was requested as the last monthly meeting, so that we can decide if fees should be raised to cover the cost of E-Punch equipment. But, we haven't made a decision about E-Punch equipment yet (see item "J" below.)

Mil reported that our membership has grown significantly in the past year. In 2006, we had fewer than 100 official members; currently, as of November 2007, we have 162 members. Also, we have more people who are signing up for two-year memberships.

Mil reported that the membership expiration reminders can be difficult; email addresses change over time, and some people just ignore the reminder emails.

Sherry presented the "2007 Volunteer of the Year Award" to Brian Coleman. Here is the full text of her presentation:

Brian is motivated by his love of maps and love of scouting. As Scout Liaison and Mapping Coordinator he has found a way to marry the two. His unbridled enthusiasm is contagious! Heâ€™s always thinking of ways to promote the sport and RMOC. Here is a list of his accomplishments: 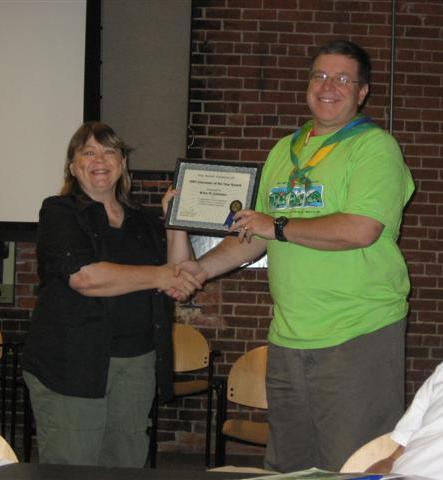 The RMOC board members decided in October that Sherry was deserving of a special award, too, having served as President for the past four years (since November 2003). Brian presented Sherry with a custom-made award with a nice speech, and we all gave a standing ovation! 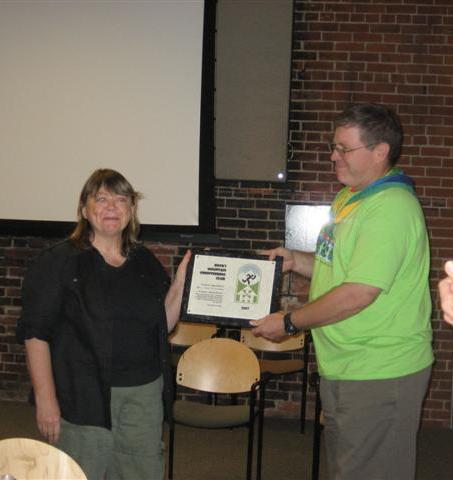 According to the RMOC bylaws, the roles of President and Treasurer are up for election in odd years. We elected Bob Ellis as Treasurer, and Sherry Litasi as President.

John Crowther presented a cost estimate for purchasing all the necessary E-Punch hardware and software. John researched all the details with Valerie Meyer, USOF's E-Punch expert, as well as several equipment vendors.

So far, John Crowther and Bob Ellis have volunteered to become RMOC's E-Punch experts. But, we would still need a few additional volunteers to thoroughly learn the system.

We then discussed all the pros and cons of investing in the E-Punch system:

DECISION: After a lot of discussion, the general feeling was that we're not really ready to invest in e-punching, primarily for manpower reasons. We decided that RMOC needs to focus on getting the basics right in 2008. In other words, we need to show that we can fill all the fundamental roles with an adequate number of volunteers at our local meets. Then we can decide if we want to "take it to the next level" with e-punching in 2009, if we have a solid volunteer track record in 2008.

Sherry will work on the filling out the 2008 schedule. Ideally, we'd like it finalized by 12/31/2007, so that Sverre can start working on permits (especially the US Forest Service permits).